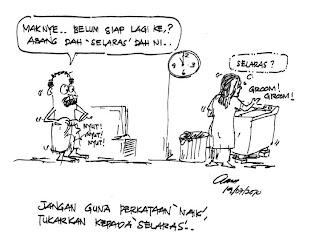 The cost of delivering Middle East crude to Asia, the world's busiest route for supertankers shipping two million-barrel cargoes of crude, jumped the most in a month as ship demand rose before year-end holidays. Charter rates for very large crude carriers, or VLCCs, on the benchmark Saudi Arabia-to-Japan route climbed 6.2 per cent to 56.15 Worldscale points, according to the London-based Baltic Exchange. Returns jumped 33 per cent to $12,369 US a day and have now added 62 per cent in two sessions. Oil companies have yet to find ships for the "vast majority" of their January cargoes, E.A. Gibson Shipbrokers Ltd. said in a report. Owners "will be quick to take advantage" of strengthening pre-holiday demand, it said.

Need someone to verify this mail. Just recieved this mail from friend. If this is indeed true, then God help the non-muslim/malay food industries!!!!!!!!!!

“What is becoming of Malaysia ? The nightmare is evolving and those caught in it are mainly the Chinese and Indians, and perhaps multinational corp with operations in M’sia. I feel sad to receive this email.

Its so sad and what a terrible economic and commercial tragedy that hard working, honest, dedicated entrepreneur like your goodself has to face such kind of rulings in the food business.

It must also been horrific and financially disastrous that Dato
Jackson ‘s Sliverbird factory is forced to close down under such heart breaking circumstances.

I know about the IKEA’s restaurant’s shut down because of the so-called question on the alleged foodstuff halal certification.

May the mercy and compassion of God Almighty be upon 1Malayasia !!
God help this country !!

Dr.Martin, The Halal Hype that is going on in our country will force many SMIs involved in food production and distribution to close shop. JAKIM has muscled its way to make itself the Monopoly of the Halal certificate. In April 2011 the Halal Act will be passed by Parliament where only Jakim has the monopoly to issue the certificate.

Each certificate cost about RM1000 and with 2000 line items in my company I will have to foot out RM2,000,000 and that is if I am lucky to get all those approved. I might as well close down my business and retrench all the 60 staff with some 100 odd dependents.

The Government will be deprived of some RM800,000 worth of taxes and duties. The Food standard will definitely decline as chefs will have less ingredients to work with. The Halal procedures will increase the food cost by 10%. JAKIM does
not care for the economy of the country. All it cares for is its rice bowl to ensure that it is relevant and seen to be working hard.

80% of the food industry is run by Non Malays. One of the criteria to obtain the Halal Certificate for restaurants is to employ Malaysian Muslim. If you do not have any Malaysian Muslim in your restaurant you will not be issued with a Halal certificate.
Where are we heading???? “

First elected as a Member of Parliament for Kota Melaka in 1986 defeating ex-Malaysian football captain Soh Chin Aun with a majority of 17,606 votes.
Re-elected in the 1990 general elections with a majority of 14,586 and re-elected for a consecutive third term in the 1995 general elections with a majority of 4,981 votes. First person to be elected for three consecutive terms in Kota Melaka as well as the first Melaka High School old boy to represent his school in his own constituency.
Detained without trial under the Internal Security Act (ISA) on 27.10.1987 and released 18 months later on 19.04.1989. First to be detained under Operation Lalang and last to be released.
Appointed as the DAP Socialist Youth Chairman in 1989 and was elected to the post in 1992. Also elected as DAP Deputy Secretary-General in 1995.
Charged under the Sedition Act and Printing Presses & Publications Act in connection with the moral scandal of former UMNO Youth President and Melaka Chief Minister Tan Sri Rahim Tamby Chik. Convicted and sentenced to two concurrent 18-month jail terms from 25 August 1998.
Elected as DAP Secretary-General in 2004.